William Edwards was Maltster and Brewer at Stoke's Croft in the 1790's, he was born around 1758, possibly the son of James Edwards, a Customs House Officer, who was residing at 78 Stokes Croft in 1775 (Sketchley's directory). He married Elizabeth Staite at St. James, Bristol, on 25 July 1785. William died in 1806 and was buried at St. Paul's, Portland Square on 9th August. John Staite and John's daughter Hannah are mentioned in William's will. Stoke's Croft at this time was at the edge of the city and still very rural. William and Elizabeth had a daughter Elizabeth that was left £4,000 in investments in William's will, she was unmarried at the time, and this was a considerable fortune for the day. It appears that John Staite and William Edwards may have married each other's sisters.

John Staite was born in Bristol in 1768, baptised at St. Nicholas on 11 September, son of William and Hannah, he married Elizabeth Edwards on 1 June 1789 at St. Philip & Jacob's. Elizabeth died in July 1800 and was buried at St. Nicholas on the 9th. John married again to Hester Jones on 4 June 1801. Their son Opie Staite was born 21 Feb. 1802. John and Hester were Congregationalists and attended the Castle Green chapel where they had their children baptised. John was a Grocer in 1806 at the time of the death of William Edwards.

William Henry Castle was born 11 June 1810 and baptised at Lewin's Mead Presbyterian on 9 Sept. 1811, son of rectifying distiller Thomas Castle and wife Mary. William married Caroline Collins, youngest daughter of the late William Jennings, Esq. of Congresbury, at St. George's, Everton, Liverpool, on 8 July 1837. He was elected as a Liberal member of the town council for St. Paul's ward in Nov. 1837 and was resident in Stokes Croft y 1835. He was still at the brewery in December 1842. William died 10 March 1865 in London, aged 54. The partnership between William Henry Castle and Thomas Rees of Liverpool was dissolved on 2 March 1842. (London Gazette). The partnerships were in the style of Rees & Castle (Formerly Guppy, Rees & Co. which included Castle, dissolved 2 March 1840) at the Mersey (Nursery?) Brewery, Kent Street, Liverpool, and Castle and Rees at the Stokes Croft Brewery. Rees carried on his trade afterwards at the Nursery Brewery, and Castle carried on at Stokes Croft.  Possibly in partnership with John Willliams who later had a brewery in Bath.

Hattil Foll of Stokes Croft Brewery took over the brewing franchise of the Pennywell Road brewery on 21 June 1843, from Lilly & Son, who at that time were still involved in the maltings on that site. Hattil was born in Drayton Parslow in Buckinghamshire at the end of 1808, baptised there on 6 January 1809, son of Richard Foll and Bridget Warren. The unusual name is Old Testament and interesting. Wikipedia says "The descendants of Hattil (also called Agia or Hagia) are listed in Ezra 2:57 and Nehemiah 7:59 as a group of people returning from the Babylonian captivity (see Ezra–Nehemiah). They are categorized by Ezra as being descendants of "Solomon's servants" (see Nethinim). In the Greek text of 1 Esdras 5:34, a closely related work, Hattil is referred to as Agia or Hagia." Hattil married Elizabeth Cartwright, in Bedfordshire, registered at Luton in the summer of 1837, their first son, Hattil Cartwright Foll, had been born and died in Dunstable in 1838. In the 1841 census Hattil and Elizabeth were living at High Street, Dunstable, Bedfordshire, with young children Flora Elizabeth Foll age 1 yr, 10 mths (1840-1917), and Richard Nathaniel Cartwright Foll age 7 mths (1841-1922).  There were three more children: Louisa Victoria born in Bristol (1843-1926), Hattil James (1850-1850) and  Hattil Edward (1853-1886).
After coming to Bristol Hattil had his private residence at Drayton Villa, Richmond Park, Clifton and he was at the brewery from at least July 1843 and by April 1846 he was a churchwarden of St. Paul's. Hattil's son, Hattil James Foll, born 1850, died at Weston-super-Mare on 13 July 1850. Another son, Hattil Edward, was born 16 Nov. 1853. Hattil was at one time in partnership with Francis Turfrey, partnership dissolved 14 Dec 1852, Turfrey went bankrupt as a brewer in Abergavenny in 1854.
Towards the end of 1857 Hattil Foll aquired the country seat of Beckford Hall on the Gloucestershire Worcestershire border, a 540 acre estate formerly occupied by John Woodward Esq. The estate employed 19 men and 8 boys. Hattil was resident here with wife Elizabeth and daughters Flora and Louisa, and son Hattil in 1861. According to the 1861 census the brewery in Stokes Croft was employing 15 men and in 1863 Charles Stocken was the brewery manager, being succeeded by Gardener the following year. By 1866 Hattil was a magistrate and by Feb. 1868 he was High Sheriff of Gloucestershire. From around 1871 Elizabeth's sister Mary Ann Cartwright was living with the family. Hattil Foll died at Beckford Hall on 10 Oct. 1881 aged 72.

Francis Abbott, of the partnership of Foll and Abbott, was born in Canterbury, Kent, on 18 June 1811, baptised at St. Dunstan's Church, Canterbury on 12 July, son of John Abbott, a corn merchant, and Elizabeth Balderston. Francis married Emma Shutely at St. Luke's Chelsea, Middx. on 24 April 1838, he was a wine merchant of address 24 Francis Street, Waterloo Road, Lambeth, Surrey, at this date. By 1841 Francis was a Wine & Spirit merchant in partnership with Horatio Robinson White, as "White and Abbott" at Oporto House, 15, Cecil Square, Margate, Kent. The partnership was dissolved on 23 June 1845 to be carried on solely by Abbott. The Oporto House premises were sold 21 July 1852 when the Abbotts, with young children Rose, Edward, and Alfred, moved to Bristol. In the 1858 Melville's directory of Margate his company is still listed at the same address in Margate and also at 23 Harp Lane, London. In 1861 Francis and family were living at 3 Apsley Place, Clifton, and by 1871 had moved to 5 Westfield Park, Westbury-upon-Trym. The 1881 census records Francis "late brewer" and Emma together with daughter Rose as visitors to a household back in Chelsea. It seems Francis may have died in London in 1890.

During Harvey & Co.'s tenure, on 30 July 1889, Mr. George Frederick Gardiner ended his service after 25 years as brewer and manager, he was presented with a pair of gold spectacles by the employees. He actually ran the brewery in the absence of its owners and it seems was the real brains behind the beers. With Frederic Harvey dead and Gardener gone it was time for a new owner to invigorate the brewery. 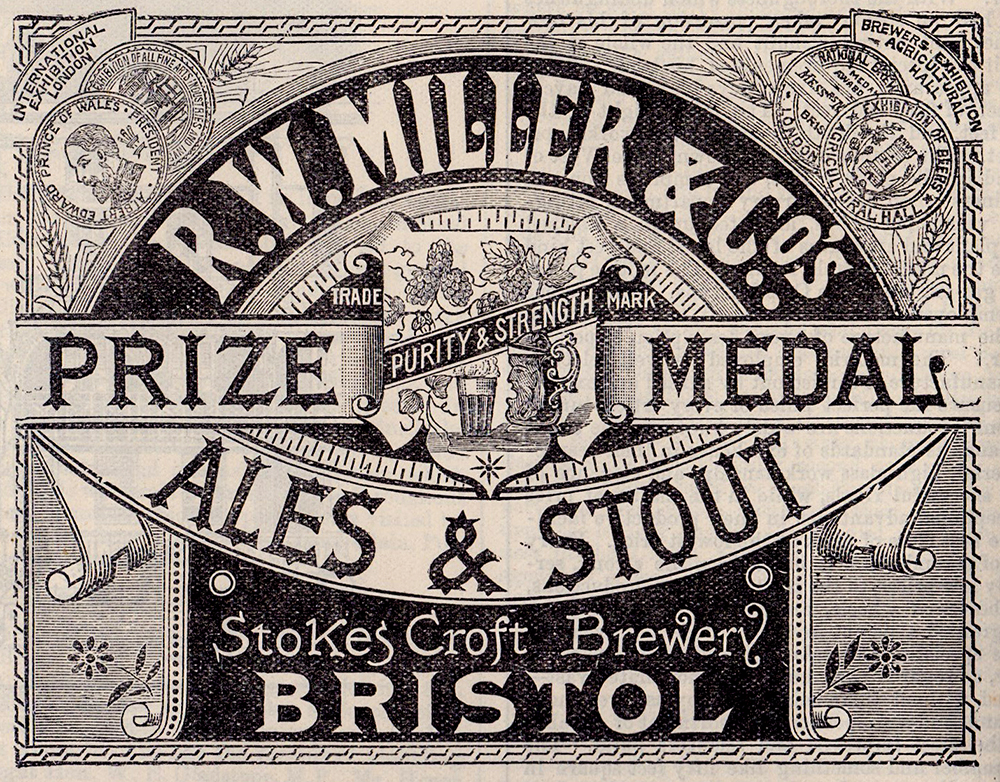 Advertisement from "The Ports of the Bristol Channel-Progress & Commerce-1893"
Robert William Miller was born at "The Vale", Ramsgate, Kent, on 13 July 1862, and baptised at Christchurch, Ramsgate, on 8 Sept. 1862, the youngest son of Robert Montgomerie Miller and Mary Jane Ranking. 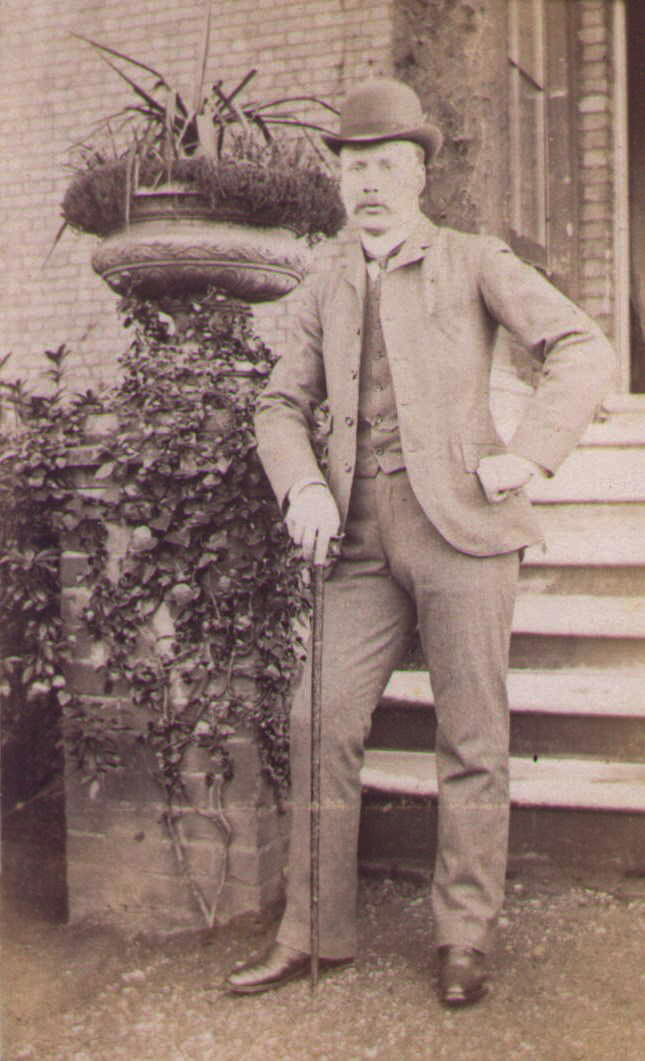 From around April 1887 until July 1889, Robert was running the City Brewery in Maylord Street, Hereford. In 1889 the firm R. W. Miller & Co. was amalgamated with Arnold Perrett & Co. of Wickwar, under whose name it was carried on. Robert joined Arnold Perrett's board of directors.

Robert had an off license to sell beer in Stokes Croft from the licensing session 27 Aug. 1890.

By 1894 the company had outlets in Palk Street, Torquay, adjoining the Marine Tavern, also in Clifton, Cardiff, Newport, Bath and Swansea according to their ads.

From the Western Daily Press - Thursday 4 October 1894 page 6: Obstructing with Beer-Barrels: Mr. Robert William Miller, of the Stokes Croft Brewery, was summoned for causing an obstruction by allowing 30 barrels remain in Moon Street, and eight boxes to remain on the footway in Upper York Street, for three-quarters of an hour. Mr Broad (Messrs Broad and Francis) appeared for the defence. The police having given evidence as to seeing the barrels and boxes lying about in the thoroughfares named August 19th, Mr Broad contended that they had not been left about for an unreasonable length of time consistent with the proper carrying on of the business, and called witnesses to bear out his statement. Supt. Croker said that Evan Drew, a cooper in the employ of defendant, was summoned in for obstruction on behalf of his master, and fined 5s and costs, and Mr. Miller was fined 20s and costs in August for a similar offence. A fine of 40s and costs was now inflicted.

The first advertisements for Aerated Waters and Cordials of every description seemed to begin appearing in the February of 1894.

From the Western Daily Press - Saturday 6 February 1897 page 5: The death occurred yesterday of Mr Robert William Miller, head of the firm of Messrs R. W. Miller and Co., Limited, of the Stokes Croft Brewery. The deceased gentleman has been able to attend to business matters until comparatively recently, and his death at the early age 34 will be regretted by a large circle of friends.

R. W. Miller & Co. Ltd. was acquired by George's Bristol Brewery in 1911 along with its 48 tied public houses.